What’s A Mennonite Girl To Do? 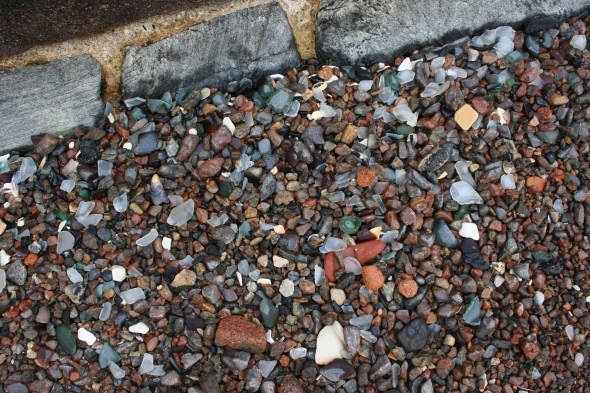 This may look like an ordinary pile of rocks on the beach, but look closely … very closely. If you are a sea glass collector you will see a jackpot of sea glass. And if you aren’t a beach glass collector and want to be, look carefully at the colors and shapes, and you should begin to be able to pick out the whites. They are sort of frosted. Another thing before I continue, picture that this is one very small section of a harbour I stumbled upon. In other words, there was loads of glass on this beach. On most beaches you can walk for five minutes before you find one piece of glass. Imagine sitting down and picking up a bread bag full of the stuff. So that was the situation I found myself in.

Thing was, we were in Stornaway, Scotland. This is located in the Outer Hebrides. Islands way out there.

Backtracking a wee bit. About 10 days.

Naw, I won’t tell you ten days worth. Short version. It was May. A wild windy May, and if you think you’ve experienced wild windy Mays, go to the northern parts of Scotland. I thought I had experienced extreme weather changes, but this was something else. Suffice it to say, all of our clothing was well used, and thank goodness for Mountain Equipment Co-op clothing. Layers and quick dry became deeply meaningful to my heart.  Maybe I’ll just show you one picture so you can see how nice it was at times. 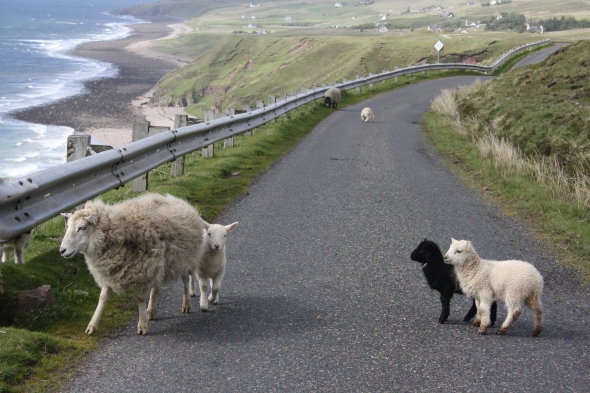 But we were in a rental car, traveling many roads, and at the time of finding the mother lode of sea glass were in Stornaway, as previously mentioned.

How we happened to find the beach was this. We had arrived on the ferry, toured the Isles of Lewis and Harris, by the way the white sand beaches to the south are stunning. Arrived at our B & B hungry after all the beach walking, but on the way out the front door to find a restaurant heard boisterous talking and laughter from behind the closed door that said ‘lounge,’ so in we went to seek advice regarding food. Inside we found six people, sitting with open Scotch bottles and weeny glasses and trays of lovely little food spread on the coffee table. I know this sounds corny, but these six people live about 140 km away from us in Nova Scotia. Yes. We sat for a while and had a wee dram to warm our appetites for food.

Off we go and found a pub on the harbour. Very nice. Not very busy.  Big fancy restaurant upstairs. We order a pint, decide to sit a bit before ordering food to enjoy the atmosphere and listen to the  accents of the locals. The moment comes when we need food. Right away. We flag the waitress and  I ask twelve or thirteen questions about items on the menu before choosing. This used to drive my husband a bit crazy but he’s grown tolerant.

She leaves, but returns shortly with bad news. An extremely large party at the restaurant upstairs, which is where the kitchen is, has just ordered their meals. Oooh. Very bad timing on our part.

We wait and wait, and wait. Meanwhile my husband gets up to go for a little walk outside, to stretch his legs. He returns about 5 minutes later with a big grin on his face. No the food hasn’t arrived. But he has good news for me. He tells me he stepped down into the harbour, and as he has learned to do, since my sea glass fetish began, looked down, and so discovered the abundance of glass.

I’ll skip the part of us wolfing down the food.

The next day, we came back. And I filled two bags in very short order. That was all fine. We had a car. It went into the trunk. And the glee on my face was a site to see.

Fast forward to going home. We flew with Air Canada. They only allow one bag these days, unless you pay. My husband has Scottish roots, so he had been busily collecting Scottish things to take home to give to family. So his bag was full and heavy. After the Scottish part of my adventure, I was going to spend a week in Cambridge, England with my smart-as-a-whip niece who studies there, and two other lovely women. From there we were heading to Florence, Italy.  That is all relevant because I did not want to lug around two bags of sea glass. The stuff is heavy.

So herein lies the dilemma. What to do?

Royal mail to the rescue. But this decision is made after careful consideration. I always carry a little calculator but still manage to get confused with local currencies.

The bottom line is, I couldn’t really pass up the opportunity. Sea glass. I didn’t need it. I wanted it. I mailed it. It arrived at our post office several weeks later.  In two boxes. And when the assistant post mistress picked one of  the boxes to hand it to me her face went gray and her eyes grew wide.

“It broken!” she said, looking at me.

BECAUSE of the coal…

What with all the mad rushes to the beach to glean coal, one can imagine the devastation to said stocks. And it came to pass that on some days there was no coal to be had. Not one piece. I neglected to say that on some days that first year we gathered upwards of twelve pieces. We’d bring them home to lay on counter to admire before adding to the current bucket or vase. Yes and we do have internet and cable. And friends. But life is simple in the Mouton.

So as I said, more people looking …. such fierce competition, and really my husband and I weren’t completely obtuse with respect to guests and Nova Scotia hospitality. We weren’t about to place a big old scar onto that well deserved reputation. We’re the dummies/hospitable hosts that told people and pointed it out and said, ‘yes take some home.’

So needless to say the coal became the equivalent of an endangered species in the inanimate realm, and finding it became even more rare and thrilling. Which became a problem because by then I had become somewhat of a beach collecting junkie. And I am not talking about live things like shells or sea urchins or sand dollars since I have no interest in taking live things away from the seashore. I know every little living thing has a purpose. Besides they stink by the time you get them home.

It was during this dry coal hunting spell that I noticed the beach glass. Well you can probably guess the rest but I’ll tell you anyway. I began to collect sea glass. I still had coal in my sights, but sea glass wasn’t such a bad alternative. So glass became the bounty and coal the rare gem. And I filled a ceramic bowl with glass. And then a bigger bowl. And then empty peanut butter tubs into a milk crate. And another…

And my husband said, “What are you going to do with all that glass?” and I said, “I’m not sure, but I’ll think of something.” and my sister-in-law said, “I can teach you to make jewelry.” and I said, “I don’t wear jewelry, why would I want to make it.” And she responded with, “I’ll show you anyway.”

Which lead to the whole fancy dog house thing. She showed me how to wire up glass and it got me thinking. And the result of all that is I began to make angels. Early on I took some to a craft fair and before I drove away, my husband said, “Don’t be disappointed if you don’t sell any.” Well it was a two hour sale and I came home with a wad of bills and he smiled and said, ‘Wow, you better come up with a name for them.’

So now I make angels in the fancy dog house and it is a good thing. Not all day and every day. Just when it seems like a good thing to do. 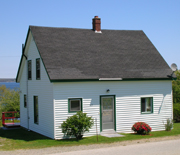